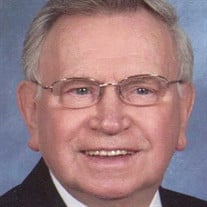 BREMEN-James E. Hatt, 84, passed from this life to his Heavenly home on September 23, 2018 in Bremen, IN. Mr. Hatt was born May 7, 1934 in Loveland, OH to Louis “Bud” and Sarah (Owens) Hatt. On October 5, 1957, in Loveland, OH, he was married to Edna M. Morris. Survivors include his three children, Sarah (Kevin) Napier of Midland, TX, Jonathan (Allyson) Hatt of Richmond Hill, Ontario, Canada and Mary (Dave) McQuaid of Greenville, SC; grandchildren, Scott (Robin) Napier, Kyle Napier, Johanna Hatt, Abagayil Hatt, Angharad Hatt, Caleb (Lynelle) McQuaid and Carson McQuaid; great-grandchild, Zoe Napier; sister, Gladys (Hank) Boerio; and brother, Earl (Missy) Hatt. He was preceded in death by his wife, Edna; his parents; four brothers, Tody, Charles, John and Bobby; and three sisters, Patsy Linville, Ruth Ann Richards and Martha “Marty” Moses. Mr. Hatt was a member of the First Baptist Church of North Liberty. He was a graduate of Baptist Bible College in Springfield, MO. Pastor Hatt served the Lord faithfully as a Baptist minister in Vancouver, WA, St. Petersburg, FL, Columbus, OH and Plymouth, IN. Later, he worked for Indiana Tool Co. (ITAMCO) in Plymouth. Before moving to Bremen, he lived in Walkerton for eight years. For the last 15 months, Mr. Hatt has lived at The Whitlock in Bremen, IN. He was blessed with many wonderful new friends and was treated with love and kindness from the caring staff of The Whitlock. The family wishes to thank each one of them for being the hands and feet of Christ. Funeral services will be Saturday, September 29, 2018 at 11:00 a.m. (Eastern Time) at the First Baptist Church of North Liberty with Pastor Wayne Joyner officiating. Burial will follow at the Woodlawn Cemetery, Walkerton. Friends may call Friday evening from 5:00 p.m. to 7:00 p.m. EDT at Rannells Funeral Home, Koontz Lake Chapel and Saturday at the church one hour prior to the service. Memorial contributions may be given to the church or to The Whitlock in Bremen.

The family of James E. Hatt created this Life Tributes page to make it easy to share your memories.

BREMEN-James E. Hatt, 84, passed from this life to his Heavenly...

Send flowers to the Hatt family.