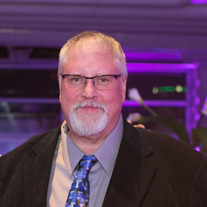 On Friday, April 10, 2020, James Buza, 60, passed away suddenly in his home, in Koontz Lake, Indiana. James was born in Chicago, Illinois on July 9, 1959 to Medard and Margaret (Hoff) Buza. He moved to his family vacation home, in Koontz Lake, many years ago. James had a carefree spirit. He could find happiness in the simplest of things, but his passions were on the broadest of spectrums. He poured himself into several hobbies which were not limited to model trains, music, gun collecting, fishing and grilling. He was a great friend to many and eager to help solve any problem which was presented to him. He shared his knowledge, skills, and unmatched wit with those that surrounded him. His gifts and presence will undoubtedly be missed by many. On July 17, 2006 he married his soul mate, Louise (Crawford) Buza, whom also survives. In addition to his beloved daughter, Margaret Buza of Plymouth, Jim opened his heart to his stepchildren, Katelynn Bennett of South Bend, Ryan Jackson of Walkerton, Lisa Smothermon (Tim) of Mishawaka, and Christine Voss (Scott) of LaPorte and cherished all nine of his grandchildren, Jack and Carson Smothermon, Simon and Felix Voss, Mannix Jackson, Liam and Claire Coffield and Parker and Charlotte Lortieand one sister, Laura Tiller of Crown Point, IN and one brother, William Buza of Nebraska. He is also survived by his extremely loyal dog, Spud. He was preceded in death by his parents and one brother, Robert Buza. In addition to being a loving husband, father, stepfather and grandfather, James devoted 30 years working at Federal Marine Terminals where he was very dedicated and hard-working. A Celebration of Life Service will take place when COVID-19 restriction have been lifted.

On Friday, April 10, 2020, James Buza, 60, passed away suddenly in his home, in Koontz Lake, Indiana. James was born in Chicago, Illinois on July 9, 1959 to Medard and Margaret (Hoff) Buza. He moved to his family vacation home, in Koontz Lake,... View Obituary & Service Information

The family of James J. Buza created this Life Tributes page to make it easy to share your memories.

Send flowers to the Buza family.