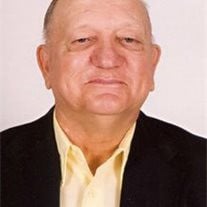 KNOX-Harold D. Sinn, 75, passed away in his home Thursday, February 17, 2011. Mr. Sinn was born February 3, 1936 in Walkerton, IN to George and Delta (Bennett) Sinn and lived in the area all of his life. On October 2, 1957 in Logansport, IN he was married to the former Judy Anderson. Survivors include his wife, Judy; two sons, Teddie (Patricia) Sinn of North Judson and Doug (Paulette) Sinn of Knox; four grandchildren, Jeremy (Terry) Sinn, Jason (Kate) Sinn, Tyler Sinn and Jessica Sinn; four great-grandchildren; three brothers, Glen (Beverly) Sinn of Tennessee, Ralph (Grace) Sinn of Walton, IN and Donald (Sandy) Sinn of Hamlet; eight sisters, June (Jack) Golding of Knox, Dorothy (Joe) McIntire of Knox, Opal (Larry) Cole of Knox, Hazel Berg of Knox, Rachel (Ray) Dowd of Culver, Mary Ann (Gene) Wheeler of Knox, Evelyn Arnett of Knox and Edna Bailey of North Judson. He was preceded in death by his parents; one brother, Raymond Sinn and one sister, Helen Betz. Mr. Sinn was a lifetime farmer. He was a member of the New Hope Baptist Church of Knox and the North Central Cattleman's Association. Funeral services will be Monday, February 21st, at 11:00 a.m. (Central Time) in Rannells Funeral Home, Hamlet Chapel with Pastor John Cargo officiating. Burial will be in the Fletcher Cemetery, Hamlet. Friends may call Sunday from 4:00 to 8:00 p.m. and Monday one hour prior to the service. Memorial contributions may be given to the Hospice of the donor's choice.

The family of Harold D. Sinn created this Life Tributes page to make it easy to share your memories.

KNOX-Harold D. Sinn, 75, passed away in his home Thursday, February...

Send flowers to the Sinn family.