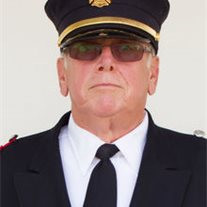 Grover C. Goetz Sr. Sept. 20, 1941-July 4, 2013 KNOX-Grover C. Goetz Sr., 71, passed away Thursday, July 4, 2013 in his home. Grover was born September 20, 1941 in Chicago, IL to Fred and Bernice (Koch) in lived in the area since 1977. On April 15, 1961 in Chicago, he was married to the former Ann Frost. Ann preceded Grover in death on October 18, 2011. He was also preceded in death by his parents. Survivors include three daughters, Cathy (Dan) Williams of Hanna, Coleen Hodge and Cindy (Rick) Clark, all of Knox; three sons, Grover (Misty) Goetz Jr. of Hamlet, Tom (Jenny) Goetz and Bob (Jayme) Goetz, all of Knox; fifteen grandchildren; three great grandchildren; his twin sister, Letia Oberlin of Hanna and brother, Fred A. Goetz of Grovertown. Grover was a retired employee of Great Lakes Plumbing and Heating. He was a member of the Hamlet Fire Department for over 35 years, serving as chief. He was a founding member of the Starke County Firefighters Association and founding member of the Starke County Firefighter's Honor Guard. Mass of Christian Burial will be held Wednesday, July 10, 2013, at 11:00 a.m. CST at St. Thomas Aquinas Church, Knox with Rev. Father Rick Holy officiating. Burial will be in the Fancher Cemetery. Friends may call Tuesday from 2:00 p.m. to 8:00 p.m. and Wednesday from 9:00 a.m. to 10:00 a.m. at Rannells Funeral Home, Hamlet Chapel. In lieu of flowers, memorial contributions may be given to St. Jude Children's Hospital.

The family of Grover C. Goetz, Sr. created this Life Tributes page to make it easy to share your memories.

Send flowers to the Goetz, family.