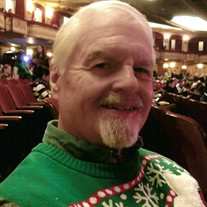 Gregory L. “Greg” Matt Knox – Gregory L. “Greg” Matt of Knox, Indiana passed away peacefully surrounded by his loving family on Saturday May 16 in his home following an illness. He was born on October 29, 1949 in LaPorte, Indiana to Jack and Peggy (Good) Matt, who survive, and was 70 years-old at the time of his death. On September 22, 1979 in Knox he married the love of his life LuAnn Bashore who also survives. Greg was a life-long resident of Knox and was extremely active in the community. He was a 1968 graduate of Knox High School, after which he received a Bachelor Degree from Indiana University in Bloomington. While at IU he was a member of the Hoosier Marching 100 marching band and was the Social Director for his fraternity. Greg retired from the US Post Office in Knox where he served as Assistant Postmaster. He was a current President of the Knox Zoning Board, was previously the Planning Administer for the city of Knox and a past member of the Knox Planning Commission. Greg also served on the Knox City Council for many years during which he was the President as well as being the past president of the Knox Chamber of Commerce. He was widely known by everyone to have the best Halloween and Christmas displays in Knox and was everyone’s favorite Substitute Teacher at Knox Community School Corporation. Greg is survived by his wife LuAnn of Knox; one daughter Tiffany (Patrick) Hoar of Knox; one son Tony (Tracy) Matt of Valparaiso; four grandchildren Cassandra Hoar, Melissa Hoar, Noah Matt and Ethan Matt; and his parents Jack and Peggy Matt of Clarksville, IN. Due to the attendance restrictions in place for the Covid-19 pandemic a Celebration of Life service will be held at a later date. In lieu of flowers, Memorial Contributions may be made to the American Liver Foundation, 39 Broadway Suite 2700, New York, NY, 10006. The Rannells Funeral Home, Hamlet Chapel is honored to be entrusted with his care. To leave online condolences go to rannellsfh.com.

The family of Gregory "Greg" Matt created this Life Tributes page to make it easy to share your memories.

Send flowers to the Matt family.