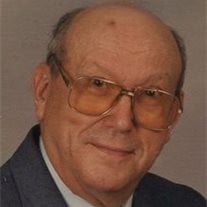 WALKERTON-Glenn Howard, 88, passed away Tuesday, April 23, 2013 in his home. Glenn was born November 15, 1924, in Swampton, KY, to Bruce and Cassie (Conley) Howard and lived in the area since 1941, coming from Swampton, KY. On November 11, 1950, in LaPorte, IN, he was married to the former Ruth Allen. Survivors include his wife, Ruth; two daughters, Karen (James) Haug of Plymouth and Debra (Daniel) Ecker of Walkerton; grandchildren, Bridgette (Tony) Koselke of Wanatah, Jamie (Andy) Aker of Plymouth, Matthew Haug of Plymouth and Brandie Ecker and Nathan Ecker, both of Walkerton; great-grandchildren, Kaylee Koselke and Skyler and Alexis Aker; one sister, Opal English of Walkerton; along with many nieces and nephews. He was preceded in death by his parents, brothers, Sam and Jack Howard, sisters, Frances Arnett, Beatrice Fraley and Minerva Garnet Howard and half-sisters, Eliza Howard and Julie Holbrook. Glenn was a retired employee of Modine Manufacturing, LaPorte. He was a U.S. Navy Veteran of WWII and the Korean Conflict and a member of the Hamlet American Legion Post #356. Glenn's hobby was his grandchildren and great-grandchildren. He loved their visits and never was ready for them to leave. He followed and supported their sports, music, computer, dance and school activities. They gave him much joy everyday of his life. Glenn will be missed by all, from the oldest to the youngest, of his family and friends. Funeral services will be Sunday, April 28, 2013 at 2:00 p.m. (Central Time) in Rannells Funeral Home, Koontz Lake Chapel. Burial and a military graveside service will follow at Grovertown Cemetery. Friends may call Saturday from 4:00 p.m. to 7:00 p.m. and Sunday one hour prior to the service at the funeral home. Memorial contributions may be given to the Wounded Warrior Project.

The family of Glenn Howard created this Life Tributes page to make it easy to share your memories.

Send flowers to the Howard family.