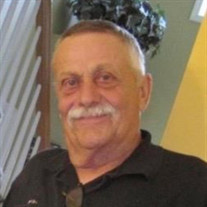 George Michael Truhler went home to be with the Lord Tuesday, April 28th 3:21 p.m. at his home in Walkerton, IN. at the young age of 72. George was born in Gary, IN and was the son of Myron (Ronnie) and Virginia (DeMuth) Truhler, who preceded him in death. He was also preceded in death by his sister Mildred (Truhler) Richey. On August 9, 1969 he married his high school sweetheart Linda (Spaid) Truhler who survives. George moved to Walkerton when he was a child and has lived there since then. He loved his town and the people in it. He was a member of St. Patrick’s Church, a former member of the Walkerton Jaycee, the Knights of Columbus, and served as a member of the Walkerton Volunteer Fire Department. He was the owner and operator of George’s Truck Service for over 40 years. George was an avid drag racing enthusiast and loved nothing more than to build and work on racecars, especially his Camaro, trucks and his tractor. He could often be found working in his shop with his family and any friends who had stopped by that day. He was the man who could fix anything and loved to help with any project and offered his time to anyone who needed it. He had more life-long friends than he could count, and he and his shop were a staple for many in town. His favorite thing to do was go drag racing with his family and be the crew chief for his son and two grandchildren who he loved dearly. George was Osceola Dragway’s “Crew Chief of the Year” in 2009 and 2011 and was a wealth of knowledge and a great help to everyone he met at the racetrack. He remained strong in his beliefs and loved his family and his life with his whole heart. He also had the softest heart for animals, especially his two current pets and many others over the years. A loyal husband, father, grandfather, and friend; he left a huge impact on everyone he met and will be missed by all. He was truly one of a kind. Also surviving, his son Ronald (Barbara), twin grandchildren, Carly and Austin, his loyal dog Nitro, Boots his rescue kitten, several nieces and nephews, as well as many other family members, close friends, neighbors and his racing family. In lieu of flowers, we would love everyone to please make a donation to the Drag Racing Association for Women in remembrance of him. You may donate at http://www.drawfasthelp.org/donate.html A graveside service will be held Monday, May 4th at 1:00 PM. Due to the Coronavirus restrictions, a limited number of people will be allowed. A celebration of life will be held at a later date. Rannells Funeral Home Koontz Lake Chapel is in charge of arrangements.

George Michael Truhler went home to be with the Lord Tuesday, April 28th 3:21 p.m. at his home in Walkerton, IN. at the young age of 72. George was born in Gary, IN and was the son of Myron (Ronnie) and Virginia (DeMuth) Truhler, who preceded... View Obituary & Service Information

The family of George M. Truhler created this Life Tributes page to make it easy to share your memories.

George Michael Truhler went home to be with the Lord Tuesday,...

Send flowers to the Truhler family.