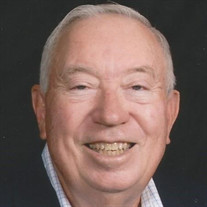 A memorial service to celebrate the life of Dr. G. R. Hershberger, Walkerton family physician for more than 37 years, will be held at 11 a.m. (Eastern time) Saturday, Nov. 3, at the Walkerton United Methodist Church. Friends may visit with the family from 9 a.m. until 11 at the church, with a lunch following the service in the fellowship hall. Dr. Hershberger (“Dick”) died of congestive heart failure on Oct. 19 at the University of Wisconsin Hospital in Madison. He is survived by his wife, Jo; children Karl (Theresa), Crete, IL; Paul (Vrinda), Satellite Beach, FL; Katie Neuser (David), Cross Plains, WI; and Laurie Pascual (Mark), Colorado Springs, CO, and grandchildren Brooke and Matt Hershberger; Uma Hershberger; Kyra, Kyle and Noel Neuser; and Scarlett, Caleb and Quinn Pascual. He also is survived by sisters Shirley (Merle) Schaunaman, Walkerton; Jan (Jack) Berrier, Lakeville; sister-in-law Georgia Walmoth, Hazel Crest, IL, and several nieces and nephews. Dr. Hershberger was born at home in Walkerton on July 31, 1935, to George and Irene Hershberger, who preceded him in death. He was a 1953 graduate of Walkerton High School and 1957 graduate of DePauw University, where he was a member of Phi Kappa Psi. In 1994, he was inducted into the DePauw Athletics Hall of Fame for his achievements in men's cross country and men's track and field as a distance runner. He entered DePauw in 1953 with no experience in cross country but decided to join the team in order to stay in shape for track season. Four years later he graduated as a three-year letterman in the sport and a co-captain his senior year. He took the two-mile championship at the conference meet his junior and senior seasons and set the ICC record in 1956 in the event. As a senior he also captured the conference championship in the one-mile run. It was at DePauw where he went on a double date that changed his life. In the spring of 1956, Dick and Jo Petry were on a double date but not with each other. It didn't take long for him to discover that the love of his life was actually sitting diagonally from him rather than across the table. From there Dick and Jo went on to marry, raise four children, share far more laughter than tears, and travel through all 50 states and several countries in Europe. Last June they celebrated their 60th anniversary. In 1961 he graduated from Kirksville (MO) College of Osteopathic Medicine. Following a year of internship at Saginaw (MI) Osteopathic Hospital, he returned to his hometown and, in July 1962, began his practice as a family physician in Walkerton. “Doc,” as his patients called him, was loved for his genuine care, gentle humor, and ability to listen. He used to say that, “If you listen to a patient long enough, he'll tell you what's wrong.” He made countless house calls over the years and frequently welcomed a patient who rang the doorbell at his home during off hours. He had staff membership at Michiana Community Hospital and St. Joseph's Medical Center in South Bend. A member of several professional organizations, he was active in his community and the Walkerton United Methodist Church. Dick was never happier than when he was spending time with his family, especially at Lake Wawasee. He enjoyed sharing the bounty from the raspberry patch in his Walkerton garden with many friends and neighbors. He also managed to find the time to play golf at several area courses and scored his Hole in One in 2006. In July 2015, Dick and Jo moved to Middleton, WI, to be closer to family members. Friends may honor Dr. Hershberger with a memorial to the Walkerton United Methodist Church, 1000 Georgia St., Walkerton, IN 46574, or Bethany United Methodist Church, 3910 Mineral Point Rd., Madison, WI 53705. Rannells Funeral Home at Koontz Lake is handling arrangements.

A memorial service to celebrate the life of Dr. G. R. Hershberger, Walkerton family physician for more than 37 years, will be held at 11 a.m. (Eastern time) Saturday, Nov. 3, at the Walkerton United Methodist Church. Friends may visit with the... View Obituary & Service Information

The family of Dr. G.R. Hershberger created this Life Tributes page to make it easy to share your memories.

A memorial service to celebrate the life of Dr. G. R. Hershberger,...

Send flowers to the Hershberger family.