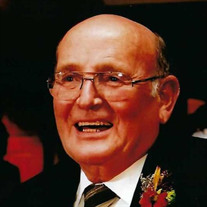 Fred was born in LaPorte County Indiana on January 8, 1935. The sixth child of 16 children of Carl Jensen and Ruth Soice Jensen. He enjoyed a happy childhood with all of his brothers and sisters and was very close to all of them. If you asked them about him, they would probably say he was the clown of the family, and loved a good joke. He told plenty of them himself. Fred graduated from Hamlet High School with the class of 1953. On May 7, 1955 he was married to Charlene (Krieg) Jensen who survives him, Of this union 4 children were born: Becky (Gregg) Orr, Fred (Denise) Jensen, Jr. Joe (Georgia) Jensen, and Jennifer (Tom) Sullivan, Jr. All of whom survive him. He is also survived by his foster daughter, Krystal (JD) McGrath. He is also survived by his grandchildren who he dearly loved and they loved him in return. They are Gayle Bailey, Gregg Orr, Jr., James Orr, Kayla Myers, Wade and Dane Wallace, Tommy Sullivan III, Jamie Poff, Kiersten Rowe, Erin and Jaelyn McGrath, Great Grandchildren, Sabre Poff Adams, Taye Adams, Kameron, Kynlee and Kase Orr, Nickolas and Jake Shorosh, Maverick Myers, Wakeland Rowe and Levi Orr. Fred owned Jensen and Sons 76 Service Station which served the community of Hamlet and the surrounding area for many years. That was where the gas was pumped for you, the windshield was washed and the oil was checked. He should have named it, Jensen and Sons and Daughter, as his daughter, Becky, spent many hours along with her brothers working there. Fred was a man of many talents. Together with his wife and children he remodeled the Old Berg Place on Starke Street in 1964-65. In 1969 they built a fireplace and added a great room. He resided there until his death. He leaves many of his creations with those he loved. The rocking horse he made for his first grandchild, Gayle, the cowboy boot bank, the anvil, toy wagons for his grandchildren, Jim and Kayla, the fire truck who Wade now cherishes, and several cradles who many people were recipients of and still have. He loved trains and had them running around his train room. His love of trains was passed on to his grandson Dane. His grandson, Tommy, who plays hockey was the recipient of a hockey stick he crafted. He could repair anything and repaired many ditch pumps that his father had built, many of which are still in use today. He shared many many good times with his friends and family on the snowmobiles in the backyard swimming pool which was enjoyed by all his family and friends. Fred belonged to the Knox Moose Lodge for many years, was a member of the Knox Masonic Lodge #639 and a 32nd Degree Mason of the Valley of South Bend, Indiana. He was a Republican Precinct Committeeman and a delegate to the Indiana Republican Convention for many years. He was a Boy Scout leader and a wonderful father figure to many boys in the Hamlet area. He loved Hamlet and served on many committees, including Hamlet Centennial Celebration in 1963, Bi-Centennial Celebration he was co-chair with Dr. Earl Leinbach. Along with Earl and many other friends he made the Boston Tea Party float, Dartmouth, which represented Hamlet in 13 parades in 1976 and won First place in many of them. He Co-Chaired the first Zucchini Festival with Dr. Earl Leinbach which raised funds for the current Hamlet Park. He was custodian of the old Hamlet school bell for many years. He found a home for it, and it now hangs in front of the Hamlet Fire Station and Community Building. Anyone who knew Fred would always have a wonderful time talking to him. He had many jokes in his mind, and it didn’t matter what you mentioned, he would always have a joke to share. Fred had 10 brothers, Bob, Neil, Paul, Richard, Peter, Rae, Carl David, Earl, Alan, and Jim. He is survived by: Paul (Mae) of Hamlet, Earl (Sue) of Lakeville and Alan (Petra) of Plymouth. He had five sisters: Nina (Jerry) Pomeroy, Lola (Devon) Miller, Rita (Ralph) Palm, Linda (Ron) Back and Jan (Dusty) Smith. He is survived by Rita (Ralph) Palm of Grovertown, and Jan (Dusty) Smith of Midlothian, TX. Fred suffered from COPD and in his later years he spent lots of time enjoying the history channel and old westerns on television. Fred loved his family and doted on his children, grandchildren, and great grandchildren. He did not want to leave this world and his wish was to live forever and enjoy life with them. However, it was not to be, but many happy memories of their PaPa will live on with them. Due to COVID-19 there will be no visitation. Private Services for the family will be at Rannells Funeral Home with Rev. Charles Krieg presiding. Celebration of Life will be at a later date. Memorial contributions can be made to Center for Hospice Care, 112 S. Center Street, Plymouth IN 46563

Fred was born in LaPorte County Indiana on January 8, 1935. The sixth child of 16 children of Carl Jensen and Ruth Soice Jensen. He enjoyed a happy childhood with all of his brothers and sisters and was very close to all of them. If you... View Obituary & Service Information

The family of Fredric D Jensen created this Life Tributes page to make it easy to share your memories.

Send flowers to the Jensen family.