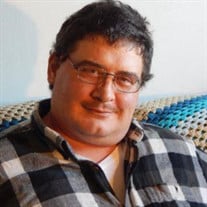 LaPORTE – Frederick J. Loomis III passed away on Wednesday March 17, 2021 in St. Mary’s Medical Center, Hobart. He was born on March 3, 1976 in Hammond to Frederick and Susan (Stone) Loomis Jr., was raised in Black Oak and currently resided in LaPorte. Fred was a former truck driver for Holland Enterprises, and an avid fan of Marvel comics/movies and Notre Dame football. He loved having lengthy debates on why Notre Dame was better than Texas A&M (his wife’s favorite team). He loved fishing, putting models together, and PS4. He was active in Boy Scouts of America until his high school graduation in 1995 from Calumet High School in Gary. Fred had a life-long illness that he never let hold him back or define his life, and was making plans for his homecoming and life with his wife the day he left this world. He married his love, Margaret (Maggie) Mathews on October 31, 2013, who survives. Other survivors include 2 daughters Briana Loomis of Alabama and Corin Loomis of LaPorte; one son Elijah Clarkson of Elwood; his father Frederick (Ruth) Loomis Jr. of Michigan; two sisters Anastasia and Kim; one brother Ricky; his grandmother Roberta Loomis of Griffith; and many aunts, uncles, nieces, nephews, and cousins. He is also survived by his beloved god-children Christopher, Joshua, Zackarey, and Kevin along with their mother Beth Bodnor who was a friend, confidant, and partner in crime. Fred was preceded in death by his mother Susan Loomis; one sister Amanda Loomis; one brother Jonathan Loomis; 2 grandfathers William H. Stone and Frederick Loomis Sr.; and one grandmother Betty Stone. Fred’s wishes were for his family and friends to celebrate his life just as he lived it. He wanted to be cremated, and a Celebration of Life Ceremony will be held at 3:00 PM CDT Sunday, October 31, 2021 at the new Clear Lake Bridge in LaPorte. Everyone whose life Fred touched is better for having known and loved him. He was an extraordinary man who will be truly missed.

The family of Frederick J Loomis III created this Life Tributes page to make it easy to share your memories.

Send flowers to the Loomis family.