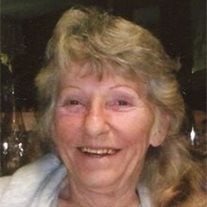 PLYMOUTH-Fran (Ione) Brauer, 73, of Plymouth, formerly of Walkerton, passed away Monday, June 17, 2013 at 3:00 p.m. after a one year illness. Fran was born September 14, 1939 in Elwood, IN to Frank and Ione M. (McCarty) Tillman. Fran moved to Walkerton in 1947 and was raised by Carl H. Gillette, deceased. In 1955 she was married to Robert Clayton, who preceded her in death. On August 4, 1989 she was married to Allan Brauer, who preceded her in death. She was also preceded in death by her parents, one daughter, Kathy Brauer and one son, Jody Clayton. Survivors include one son, Jamie (Sharon) Clayton of Walkerton; five grandchildren, Angel VanArman, Jason and Jeremy Clayton, Adrian Prochno and Zachary Graham; four great-grandchildren, Brittany, Kenny, Aalayah and Brylon; three sisters, Nancy (Chick) Fry and Mary Emigh, all of Walkerton and Glenda (Randall) Krueger of Wisconsin and one brother, F. Stephen Tillman of Osceola. She was a retired employee of Howmet Corp. of LaPorte. Funeral services will be Friday, June 21, 2013 at 2:00 p.m. (Eastern Time) in Rannells Funeral Home, Koontz Lake. Burial will follow at the Woodlawn Cemetery, Walkerton.

The family of Fran Ione Brauer created this Life Tributes page to make it easy to share your memories.

Send flowers to the Brauer family.