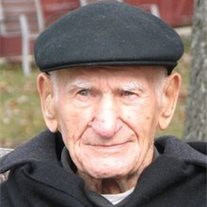 KOONTZ LAKE-Floyd W. Engle, 95, passed away Thursday, November 7, 2013 in his home. Mr. Engle was born December 24, 1917 in Swift Current, Saskatchewan, Canada to Homer and Marie (Johnson) Engle, and lived in the area for 36 years, coming from Harvey, IL. On March 23, 1941 in Mt. Ayers, IN, he was married to the former Irene Cisson, who preceded him in death on January 11, 2005. He was also preceded in death by his parents and great-granddaughter, Kaley Irene Peterson. Survivors include one daughter, Janice (John) Palkovich of Koontz Lake; two granddaughters, Amy (Brian) Jackson of South Bend and Sara (Shannon) Peterson of North Liberty; one great-grandson, Eli Floyd Jackson; and one sister, Alice Nedoff of Portage. Mr. Engle was a retired employee of Allis Chalmers of Harvey, IL. He was a member of the Immanuel Lutheran Church of Donaldson and a U.S. Army Veteran of WWII, serving as a member of the 99th Infantry Division Association. He was also a member of the Walkerton American Legion Post# 189. Funeral services will be Monday, Veteran's Day, November 11, 2013 at 12:00 noon (Eastern Time) at Emmanuel Lutheran Church of Donaldson with Pastor Dennis Wenzel officiating. Burial will follow at the Immanuel Lutheran Cemetery where he will be given Military Graveside Honors. Friends may call Sunday from 4:00 p.m. to 8:00 p.m. ET at Rannells Funeral Home, Koontz Lake Chapel and Monday at the church one hour prior to the service. In lieu of flowers, memorial contributions may be given to The Center for Hospice and Palliative Care, 112 S. Center St., Plymouth, IN 46563.

KOONTZ LAKE-Floyd W. Engle, 95, passed away Thursday, November 7, 2013 in his home. Mr. Engle was born December 24, 1917 in Swift Current, Saskatchewan, Canada to Homer and Marie (Johnson) Engle, and lived in the area for 36 years, coming from... View Obituary & Service Information

The family of Floyd W. Engle created this Life Tributes page to make it easy to share your memories.

Send flowers to the Engle family.