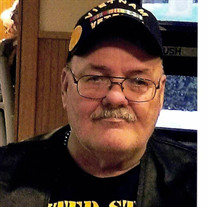 PLYMOUTH – Earnest F. “Ernie” Rollings Jr. passed away on Wednesday March 24, 2021 in Northwest Health LaPorte Hospital following an illness. He was born on February 6, 1951 in Great Lakes, IL to the late Ernest F. and Shirley A. (Glens) Rollings Sr., and was 70 years-old at the time of his death. He lived in the area for 35 years coming from Markham, IL and worked numerous jobs before he became sick, most recently as a Corrections Officer for the Indiana Dept. of Corrections in Michigan City. On July 26, 1986 in Homewood, IL he married Mary Hughes, who survives. He was a veteran of the US Navy serving three tours in the Vietnam War. Most of all Ernie lived his life for his kids and grandkids. Ernie is survived by his wife Mary of Plymouth; four children Michelle (Jeff) Lilla of Discovery Bay, CA, Marie Celeste (Ben) Berkman of Junction City, KS, Jeanette Rollings of Plymouth, and Thomas (Kim Bergan) Rollings of North Liberty; nine grandchildren Colby, Jakob, Lewis, Kristiannah, Arabellah, Blaide, Caisyn, Delaney, and Zariah; very close family friend Jennifer White; two brothers Randy Rollings of TN and Chris Rollings of TX; and one sister Norma Maldonado of IN. He is preceded in death by his parents. Visiting hours will be from 4:00 to 6:00 EDT Tuesday, March 30 at the Rannells Funeral Home, Koontz Lake Chapel. A Military Honor ceremony will be held at 6:00 EDT Tuesday also at the funeral home. The family requests, and state and local ordinances still mandate, for masks to be worn properly at all times and social distancing be observed.

The family of Ernest F. Rollings Jr. created this Life Tributes page to make it easy to share your memories.

Send flowers to the Rollings family.