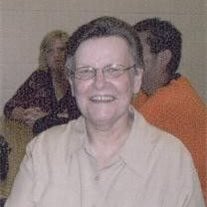 KNOX-Emma L. Tolson Thompson, 56, passed away Saturday, May 7, 2011, at 7:40 a.m. in IU Health, Starke Hospital in Knox. Emma was born April 8, 1955, in Knox to David R. and Edna M. (Jordan) Tolson and lived in the area all her life. She is survived by: two sons, Michael D. Watts of Knox and Donald R. Thompson of Westville; one daughter, Jenine (Aaron) Pugh of LaPorte; five grandchildren, Amanda, Tara, Ashley, Michael & Austin; six brothers, James Tolson of North Judson, Raymond Tolson, Hager Tolson & Michael Tolson, all of Knox, Jerry Tolson of Argos and Danny Tolson of Grand Ridge, FL; three sisters, Helen Mullins of Knox, Jacqueline Collins of English Lake and Anna Rudd of Michigan City. She was preceded in death by her parents, and one brother, Albert Tolson, Sr. Emma was a laborer in manufacturing and worked at Seely Springs in Logansport. She also was a member of the Knox Community Outreach Tabernacle. Funeral services will be Friday at 7:00 p.m. Central Time at Rannells Funeral Home, Hamlet Chapel. Friends may call Friday from 4:00 p.m. CDT until the time of service at the funeral home. In lieu of flowers, memorial contributions may be made to Rannells Funeral Home.

The family of Emma Tolson Thompson created this Life Tributes page to make it easy to share your memories.

Send flowers to the Thompson family.