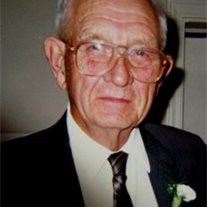 KNOX-Edgar Bailey, 88, of rural Knox, died Friday, August 13, 2010 at Golden Living Center in Knox. Edgar was born to Maston Bailey and Eliza Miller Bailey in the Ohio River town of Rabbit Hash, Boone County, Kentucky on August 28, 1921. The Bailey and Miller families were early settlers of Magoffin and Floyd Counties in Kentucky and Edgar was proud of his Kentucky heritage, though he was raised in Indiana. Edgar married Elsie Watson Bailey on September 13, 1941 in Starke County, IN. She survives. They made their home and raised their family in Starke County, in Ober and in rural Knox, and also lived for a short time in Kentucky. In his younger years, Edgar was an automobile mechanic. In the early 1950s, he learned to operate heavy construction machinery, eventually becoming an Operating Engineer. He was a member of Local 150 of the International Union of Operating Engineers for more than 50 years. He especially enjoyed running cranes, including long boom cranes, and was very knowledgeable about them. His skillful and safe crane operation earned him the respect of his co-workers. They trusted him to complete a job safely while protecting those working with him. He worked on construction projects across northern Indiana and in Chicago and also at Burns Harbor unloading cargo ships. Following in the footsteps of his grandfather, John Bailey, Edgar was also a minister of the Baptist faith for more than 50 years. He was ordained in the Ancient Christian Association of the United Baptist Church in Kentucky and, later, in the Freewill Baptist Church in Indiana. He was often called upon to minister in area churches and he held offices in his denominations including Clerk and Treasurer. He was well known in the area for performing weddings and for his ministry of visiting the sick. He founded several local churches, including the Little Dove Baptist Church in Toto and the Knox Freewill Baptist Church. He was a member of the Knox Freewill Baptist Church. His family will miss the sound of his voice and the words of his prayers before meals at family gatherings. His Christian faith is the best inheritance that Edgar has given his family. Edgar loved to travel, especially in an RV. Among his favorite trips was a motor home journey to Alaska. He also enjoyed wintering in Florida for many years. In addition to his wife, Edgar is survived by four daughters; Delores J. Rodgers (Dena) of Knox. Donna K. Runyan (Jack) of New Haven, IN, Shirley A. VanZanten (Ken) of Jenison, MI and Sandra L. Ellis (Dan) of St. John, IN; one son, Ronald E. Bailey (Patti) of Dallas, GA and eleven grandchildren, David Rodgers, Deborah Rodgers, Joseph, Daniel Rodgers, Douglas Runyan, Jeffrey Runyan, Jennifer Runyan Cassel, Eric Brown, Dawna Brown, Sherry Kimmey Deslauriers, Steven Kimmey and Erin Bailey Turner and 24 great-grandchildren. He is also survived by half-brothers and sisters, Cecil Donald, Melissa and Ruby. He was preceded in death by his parents, newborn daughter, Carolyn Sue, brothers, German and Elmer, sisters, Easter Howard, Ethel White and Elsie Hill and half-brothers, Virgil, Earl, Forest and Henry Joe. Funeral services will be Tuesday at 11:00 a.m. (Central Time) at Rannells Funeral Home, Hamlet Chapel with James R. Adcock of the Bible Baptist Church in Knox officiating. Burial will follow at Fletcher Cemetery, Hamlet. Friends may call Monday 4-8 p.m. and Tuesday after 10:00 a.m. until the time of services. In lieu of flowers, memorial contributions may be made to Alzhimer's Assoc., Greater Indiana Chapter or American Heart Assoc., Northern Indiana Chapter.

The family of Pastor Edgar Bailey created this Life Tributes page to make it easy to share your memories.

Send flowers to the Bailey family.