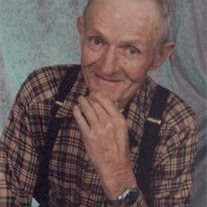 KNOX-Earnest Pinks, 77, passed away Tuesday, June 1, 2010, at 11:30 a.m. in Valparaiso Care & Rehab Center. Earnest was born December 20, 1932, in Salyersville, KY, to Caloup and Ruth (Salyer) Pinks and lived in Knox since 1978, coming from Burns Harbor, IN. On January 19, 1988, in Knox, he was married to the former Dorothy Lindy. He is survived by his wife, Dorothy; four sisters, Dolly Karch, Barbara Decker and Cindy Karuss, all of LaPorte, and Ethel Feddeler of Knox; four brothers, Virgil of Griffith, GA, William of LaPorte, Charles of Francesville, and Mack of Stanton, KY. Earnest had been a trackman for Grand Trunk Railroad. Funeral services will be Saturday at 1:00 p.m. Central Time at Highway Chapel Church of God of Hamlet with Pastor Dan Allen and Rev. Erve Bradley officiating. Burial will be at Eagle Creek Cemetery of Knox. Friends may call Friday from 4-8 p.m. CDT at Rannells Funeral Home, Hamlet Chapel, and Saturday one hour prior to the service at the church

The family of Earnest Pinks created this Life Tributes page to make it easy to share your memories.

Send flowers to the Pinks family.