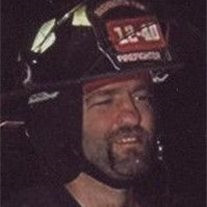 KNOX-Dusty D. Kasten, 40, passed away July 22, 2011 in IU Health Starke Hospital due to an ATV accident. Dusty was born October 6, 1970 in Knox, IN to Thomas and Lois (Elder) Kasten and lived in the area all of his life. On August 22, 1992 in Hamlet, he was married to the former Tawyna Byer. Surviving are his wife, Tawnya; three daughters, Tiffany Kasten, Brittany Kasten and Dusty Rose Kasten, all of Knox; one son, Tyler Kasten of Knox; six sisters, Linda Ritchie of Big Sandy, TN, Kathy Upchurch, Tina Singleton, Sandy Singleton and Tommie Byer, all of Knox and Rosanna Kasten of Frankfort, IN and four brothers, Robert Kurtz Jr. of Tennessee, Virgil Kurtz and John Kasten, both of Knox and Theodore Kasten of Frankfort, IN. He was preceded in death by his parents; step-father, Leroy Drane; sister, Josephine Drane and brother, Leroy Drane Jr. Dusty was an employee of Pregis of Plymouth. He was a member of the Washington Township Fire Department for eighteen years. He previously had been rewarded commendations for Firefighter of the Year and First Responder of the Year and had also served as an officer. Funeral services will be Wednesday at 11:00 a.m. (Central Time) at the Washington Township Community Center with Pastor George Elder Jr. officiating. Cremation will follow. Friends may call Tuesday at the Washington Township Community Center from 4:00 to 8:00 p.m. and Wednesday 9:00 a.m. until the time of services. A Firefighter Service will be held Tuesday at 8:00 p.m by the Washington Township Fire Department. In lieu of flowers, memorial contributions may be given to the family. Rannells Funeral Home, Hamlet Chapel is handling arrangements.

The family of Dusty D. Kasten created this Life Tributes page to make it easy to share your memories.

Send flowers to the Kasten family.