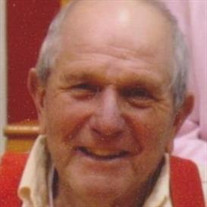 ROLLING PRAIRIE-Duane F. Williamson passed away peacefully on Friday, February 22, 2019 at Miller’s Merry Manor, New Carlisle, IN, following an illness. He was 95 years of age at the time of his death. Duane was born November 1, 1923 in Hampshire, IL to the late William H. and Iva E. (Beard) Williamson and lived in rural Rolling Prairie for most of his life. On June 17, 1945 in Rolling Prairie, he was married to Donna Halter, who preceded him in death along with his parents; daughter, Gail Hull; three brothers, Ellis, Wilbur and Lee; and one sister, Ellen Ritzler. He is survived by one daughter, Wendy (Mike Kulusa) Blair of Rolling Prairie; three grandchildren, Michelle (Kris) Rannells of Hamlet, Mathew (Tia) Blair of Rolling Prairie and Donna Hull of LaPorte; six great-grandchildren, Ashley Blair, Brittnie Rannells, Makenna Blair, Kara Blair, Tessa Blair and Erik Paniccia; and one great-great-granddaughter, Emilie Blair. Duane was a retired supervisor who worked hard his entire life building roads throughout Indiana for the Indiana Department of Transportation. He was a former superintendent for the LaPorte County Highway, a member of the Rolling Prairie United Methodist Church and the LaPorte County Republican Men’s Community. He loved building things, gardening, playing cards and talking about both politics and anything Abraham Lincoln. Funeral services will be Wednesday, February 27, 2019 at 12:30 p.m. CST at the Rolling Prairie United Methodist Church. Burial will follow at the Rolling Prairie Cemetery. Visitation will be Wednesday at the church from 11:00 a.m. to 12:30 p.m. CST. In lieu of flowers, the family request memorial contributions be made to the Rolling Prairie United Methodist Church. Rannells Funeral Home, Hamlet Chapel is handling arrangements.

ROLLING PRAIRIE-Duane F. Williamson passed away peacefully on Friday, February 22, 2019 at Miller&#8217;s Merry Manor, New Carlisle, IN, following an illness. He was 95 years of age at the time of his death. Duane was born November 1, 1923... View Obituary & Service Information

The family of Duane F. Williamson created this Life Tributes page to make it easy to share your memories.

Send flowers to the Williamson family.