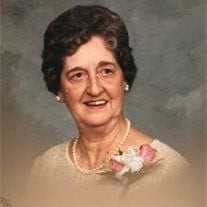 KOONTZ LAKE-Dorothy N. Martin, 96, passed away Thursday, May 5th, 2011, at 10:45 p.m. in her home. Dorothy was born October 21, 1914, in Chicago, IL, to Charles and Chlora (Andrus) Robertson and lived at Koontz Lake 64 years, coming from Tyner. On June 15, 1940, in Chicago, IL, she was married to Homer G. Martin, who preceded her in death in January, 1993. She is survived by one daughter, Nancy Stoute of Koontz Lake; three sons, Ronald (Margo) Martin of Hamlet, David (Valarie) Martin of White Pigeon, MI, and Bruce Martin of Huntersville, NC; grandchildren, Brent Coffin, Susan Krol Conrad, Jennifer Martin Lintner, Jamie Martin, Christopher Martin, Lindsay Martin Pott and Shawn Martin; great-grandchildren, Logan Conrad, Lily Conrad and Ewan Lintner. She was preceded in death by her parents; husband; daughter, Linda Krol; and one brother, Charles Robertson. Dorothy was a homemaker, and a member of the Walkerton Presbyterian Church and Koontz Lake Fire Department Women's Auxiliary, a volunteer for the Starke County Republican Central Committee, and taught Vacation Bible School at the Koontz Lake Missionary Church. Funeral services will be Monday at 1:00 p.m. Central Time at the Walkerton Presbyterian Church. Burial will be at Woodlawn Cemetery in Walkerton. Friends may call Sunday from 4-7 p.m. CDT at Rannells Funeral Home, Koontz Lake Chapel, and Monday one hour prior to the service at the church. In lieu of flowers, memorial contributions may be made to the church or The Center for Hospice and Palliative Care, Inc., 111 Sunnybrook Court, South Bend, IN 46637. For online condolences go to: rannellsfuneralhome.com

The family of Dorothy N. Martin created this Life Tributes page to make it easy to share your memories.

Send flowers to the Martin family.