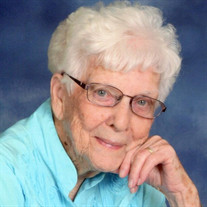 WALKERTON- Dori Cline (Dorothy A. Kearney) passed away Sunday, March 3, 2019 at her home in the loving care of her family. Born to James J. and Frances (Finley) Kearney on January 13, 1930 in Denham, Indiana, she was the sixth of seven children in a family that grew strong through faith, love and respect in times of adversity and times of joy. The legacy and richness of the family and their values lives on in the large family of descendants of Dori's parents, lovingly known as Grandma and Grandpa Kearney. Dori graduated from Walkerton High School in 1948 and worked at Sears in Chicago and Bendix in South Bend. Later she worked at Dr. Hershberger's office in Walkerton. On April 28, 1956 at Holy Cross Church in Hamlet, she married Richard D. Cline, her husband of nearly 63 years, who survives. Together they enjoyed traveling every summer throughout the U.S. in their Econoline van with their young children and later spending winters in Florida or Texas. Pinochle and slot machines were Dori's favorite games, though not necessarily in that order. Always a quiet helper of others, Dori was a member of St. Dominic's Catholic Church at Koontz Lake, after many years as a member of St. Patrick's Church in Walkerton. In addition to her husband, Richard, Dori is survived and missed by her daughters, Carla (Mark) Michalski and Julie A. (Barb) Cline; daughter-in-law, Julie K. (Tim) Cline; grandsons, Ryan (Whitney) Michalski, Eric Michalski, Kyle (Laura) Cline, Kayne (Kristen) Cline; brother, Tom (Barb) Kearney; two very special nieces, Mary Serge and Marge Burchiel; caregiver and friend, Vickie Ganger; and 32 other much loved nieces and nephews. Dori was preceded in death by her son Timothy J. Cline; sisters, Patricia (John) Cowger, Vivian (Clarence) Duttlinger, Ursula (Kenneth) Pratt and Elaine (George) Jachim; and brother, Jim (Peggy) Kearney, Jr. A Memorial Mass for Dori will be celebrated on Saturday, March 9, 2019 at 10:00 a.m. Central/11:00 a.m. Eastern at Holy Cross Catholic Church in Hamlet followed by a gathering at the Walkerton Community Building. In lieu of flowers, memorial contributions may be made to the Center for Hospice care, Hospice Foundation, 501 Comfort Place, Mishawaka, Indiana 46545. Rannells Funeral Home, Koontz Lake is handling arrangements

WALKERTON- Dori Cline (Dorothy A. Kearney) passed away Sunday, March 3, 2019 at her home in the loving care of her family. Born to James J. and Frances (Finley) Kearney on January 13, 1930 in Denham, Indiana, she was the sixth of seven children... View Obituary & Service Information

The family of Dorothy A. Cline created this Life Tributes page to make it easy to share your memories.

Send flowers to the Cline family.