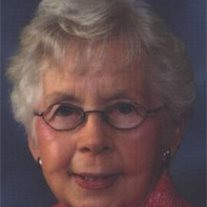 KOONTZ LAKE-Dolores J. Gjemre, 83, passed away peacefully November 11, 2010 in Florida Hospital, Sebring, Florida, after a short illness. Dolores was born August 29, 1927 in Hamlet, IN to Dwight and Marguerite (Vieting) Burch and lived in the area all of her life, except wintering for the past twenty years in Sebring, FL. On June 1, 1947 in Hamlet, IN she was married to Donald G. Gjemre, who preceded her in death on August 13, 1995. She was also preceded in death by her parents and granddaughter, Amy Shireman in 2007. Survivors include three daughters, Jeana Shireman of Midlothian, VA, Nancy (Bob) Wieczork of Koontz Lake and Jody (Joe) Rannells of Koontz Lake; five grandchildren, Carrie (Tom) Gwyer of Myrtle Beach, SC, Nicole (John) Arnold of Granger, Lindsey Huff of Chicago, Drew Rannells of Chicago and Abbey Rannells of Los Gatos, CA; three great-granddaughters, Erin, Casey and Molly; three sisters, Marilyn Burch of Grovertown, Carol (Dick) Heinrich of Sebring, FL and Connie Wegner of Cody, NE; one brother, Warren (Sherry) Burch of Hamlet and many wonderful nieces and nephews. Dolores was a 1945 graduate of Hamlet High School, a lifetime member of St. Matthew Lutheran Church of Hamlet and the past-president of the Lake Forrest Beach Club of Koontz Lake. She retired from Howmet Industries of LaPorte after twenty-five years of service. Dolores' life revolved around her family, friends and music. Dolores, known as Grandma Dodo or Aunt Dodo to many, was the matriarch of the family. Her children, grandchildren and extended family were the center of her life. She always took a special interest in them individually. Hospitality was her forte. Her home was always welcoming and warm. One could always expect a good time and a good meal. Her musical abilities enriched the lives of many. She was a soprano soloist for church services, weddings and funerals. She was a witty entertainer, performing musical skits. Her grandchildren and great-grandchildren were captivated by her ability to play any song request by ear. Funeral services will be Tuesday at 11:00 a.m. (Central Time) at St. Matthew Lutheran Church, with Pastor Kyle Wright officiating. Burial will be at the Grovertown Cemetery. Friends may call Monday from 2:00 to 8:00 p.m. CST at Rannells Funeral Home, Koontz Lake Chapel and Tuesday at the church after 10:00 a.m. In lieu of flowers, memorial contributions may be given to the church. To leave online condolences go to: rannellsfuneralhome.com. GOD BLESS OUR PRECIOUS SONGBIRD.

KOONTZ LAKE-Dolores J. Gjemre, 83, passed away peacefully November 11, 2010 in Florida Hospital, Sebring, Florida, after a short illness. Dolores was born August 29, 1927 in Hamlet, IN to Dwight and Marguerite (Vieting) Burch and lived in the... View Obituary & Service Information

The family of Dolores J. Gjemre created this Life Tributes page to make it easy to share your memories.

Send flowers to the Gjemre family.