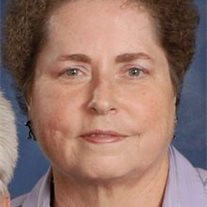 KNOX-Diane M. Squibb, 63, of Knox, IN passed away Wednesday, February 8, 2012 in Golden Living Center, Knox, IN. Mrs. Squibb was born March 2, 1948 in Orange County, IN to Robert Dale and Mary Marguerite (Knowles) Owen and lived in Knox for six years, coming from Sharpsville, IN. On December 13, 1986 in Burlington, IN she was married to Rev. Ray Squibb, who survives. Also surviving are two daughters, Dawn Wilkinson of Fishers, and Anna Squibb of Ft. Wayne; two sons, Michael Bannon of Kokomo and Joel Squibb of Lebanon, and four grandchildren, Ashley Collins, Tyler Squibb, Jessica Squibb and Alexander Pensinger. She was preceded in death by her parents. Mrs. Squibb was an employee of the Starke County Library. She was a member of the United Methodist Women, Psi iota Xi, the Starke County Historical Society and was a Girl Scouts of America past leader. Being a pastor's wife, she helped anchor churches for twenty-five years including teaching Sunday school and organizing vacation bible schools. She was a world traveler whose travels included Scotland, England, Israel, Canada, Alaska and many travel destinations within the U.S. She was also the best fishing partner ever. Funeral services will be Sunday at 12:00 Noon (Central Time) at the Knox United Methodist Church with Rev. Bob Dexter, Rev. Frank Beard and Superintendent Cindy Reynolds officiating. Friends may call Saturday at the United Methodist Church from 5:00 p.m. to 9:00 p.m. and Sunday after 11:00 a.m. A second funeral service will be held Monday at 1:00 p.m. (Eastern Time) at Cane Creek Christian Church, French Lick with a gathering one hour prior to the service. Burial will be at the Cane Creek Cemetery. Memorial contributions may be given to the North Indiana Conference United Methodist Church Pastor's Emergency Fund, Indianapolis, IN. Rannells Funeral Home, Hamlet Chapel is handling arrangements.

KNOX-Diane M. Squibb, 63, of Knox, IN passed away Wednesday, February 8, 2012 in Golden Living Center, Knox, IN. Mrs. Squibb was born March 2, 1948 in Orange County, IN to Robert Dale and Mary Marguerite (Knowles) Owen and lived in Knox for... View Obituary & Service Information

The family of Diane M. Squibb created this Life Tributes page to make it easy to share your memories.

Send flowers to the Squibb family.