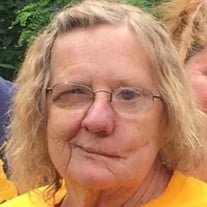 Deleen “Finky” Cook, 71, of Walkerton, Indiana, passed away at her home on Tuesday December 1, 2020 surrounded by her loved ones. Finky was born in Gary, Indiana on May 5, 1949 to the late Evelyn (Allen) and Ralph Campion. She graduated from Oregon-Davis High School in 1967. On May 19, 1973 she married Jerry D. Cook of Lyons Falls, New York. In 1994 she graduated nursing school with honors, becoming a registered nurse and eventually retired from Mercy Hospital in Watertown, New York. Finky was a member of the Walkerton United Pentecostal Church where she taught Sunday School and was involved in many activities including the “Hands of the Lord” deaf ministry and the ladies’ prayer group. She loved camping, reading, traveling, and spending time with her family. Finky is survived by her husband Jerry Cook, four children: Joseph (Talia) Reed of North Liberty, Jerry (Michelle Condon) Cook of Jonesboro, Arkansas, Jason Cook of Walkerton, and Kimberly (Patrick) Armstrong of Walkerton, along with 10 grandchildren and 8 great-grandchildren. She also leaves behind three brothers: Robert (Diana) Brayfield of Hobart, Ralph Campion, Sr. of Walkerton, and John (Arlene) Wise of Ober, as well as four sisters: Karen Boger of Pekin, Illinois, Carol (Charles) Hannah of North Judson, Mary Sampson of Walkerton, and Margaret Puckett of Ennis, Texas. A funeral service will be held at 12:00 PM EST on Saturday, December 5 at the Walkerton United Pentecostal Church, 1174 Lake Street, Walkerton, IN 46554. Visiting hours will be held at the church one hour before the funeral. A burial service will take place after the funeral at the Grovertown Cemetery on IN-23 in Grovertown, IN. Due to the Covid-19 pandemic local and state restrictions proper use of facemasks and social distancing as well as all other recommendations are required.

The family of Deleen "Finky" Cook created this Life Tributes page to make it easy to share your memories.

Send flowers to the Cook family.