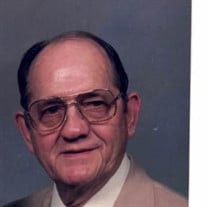 WALKERTON – Delbert G. Krick of Walkerton passed away on Friday, January 22, 2021 at Miller’s Merry Manor, Walkerton following an illness. He was born on July 25, 1925 in North Liberty to the late Fred C. and Catherine (Kilburg) Krick and was 95 years-old at the time of his death. He lived in the area his entire life and was a retired Press Operator at the former Bendix Corp. On February 16, 1952 in LaPorte he married the love of his life, the late Anna F. Campbell, sharing 59 years of marriage. Delbert was a Veteran of the US Navy serving in WWII, a member of the Walkerton American Legion and North Liberty VFW, and a member of the Walkerton United Methodist Church. He was a fun-loving man who would help anyone at any time. He showed this love of helping people by doing carpentry work after his retirement for anyone who needed it. Above all he was a devoted family man who loved them dearly. Delbert is survived by two daughters Elizabeth (Daniel) Drotar of Walkerton, and Cynthia (Kevin) Stock of Ft. Wayne; one son Frederick Krick of Royal Oak, MI; ten grandchildren Stephanie Drotar-Grassi, Ryan Drotar, Taylor Stock, Logan Stock, Gavin Stock, Madeleine Krick, Dmitri Krick, Emerson Krick, and Avery Krick. He is preceded in death by his parents; wife; one grandson Scott Drotar; five sisters Harriett Klinedinst, Muriel Roberts, Margurite Bierly, Betty Schrader, and Dede Fejes; and three brothers Tim Krick, John Krick, and Ben Krick. Due to the Covid-19 pandemic there will be a private Graveside Service held. There will also be a public Celebration of Life Service held at a later date when the pandemic has subsided. In lieu of flowers memorial contributions may be made to either the Scott Drotar Memorial Scholarship Fund c/o Teachers Credit Union, Walkerton or to the Walkerton United Methodist Church.

WALKERTON &#8211; Delbert G. Krick of Walkerton passed away on Friday, January 22, 2021 at Miller&#8217;s Merry Manor, Walkerton following an illness. He was born on July 25, 1925 in North Liberty to the late Fred C. and Catherine (Kilburg)... View Obituary & Service Information

The family of Delbert G. Krick created this Life Tributes page to make it easy to share your memories.

WALKERTON – Delbert G. Krick of Walkerton passed away on Friday,...

Send flowers to the Krick family.