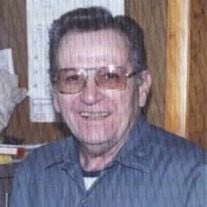 WALKERTON-Dean Edward Anderson, 76, passed away Sunday, October 10, 2010 in LaPorte Hospital, LaPorte, IN after an illness. Mr. Anderson was born October 30, 1933 in LaPorte County, IN to Glen and Mabel (Davis) Anderson and lived in the area all of his life. On June 27, 1953 in Walkerton, IN he was married to the former Shirley Zulliger. Surviving are his wife, Shirley; two sons, Keith (Kay) Anderson and Todd (Teri) Anderson, all of Walkerton; Grandchildren, Kyle (Jennifer) Anderson of Koontz Lake, Vanessa Anderson of Indianapolis, Jordan Anderson of Walkerton and Victoria Anderson of Walkerton and one sister, Phyllis Lotter of LaPorte. He was preceded in death by his parents; one son, Stephen Anderson and two brothers, Gilbert and Larry Anderson. Mr. Anderson was a farmer. He was a member of the Walkerton United Methodist Church, the LaPorte County Farm Bureau, the Masonic Lodge, the Scottish Rite, the Shriners and Superintendent and member of the LaPorte County 4-H Swine Club. He was a past member of the John Glenn School Board, the LaPorte County Library Board and the LaPorte County Row Crop Association. He was a former Johnson Township Trustee and previous Director of the Soil & Water District of LaPorte County. He enjoyed playing softball and bowling. Funeral services will be Thursday, October 14, 2010 at 11:00 a.m. (Eastern Time) at Rannells Funeral Home, Koontz Lake Chapel with Pastor Charlene Allen officiating. Burial will be at the Woodlawn Cemetery, Walkerton. Friends may call Wednesday from 4:00 to 8:00 p.m. ET and Thursday one hour prior to the service at the funeral home. Memorial contributions may be given to the Walkerton United Methodist Church.

WALKERTON-Dean Edward Anderson, 76, passed away Sunday, October 10, 2010 in LaPorte Hospital, LaPorte, IN after an illness. Mr. Anderson was born October 30, 1933 in LaPorte County, IN to Glen and Mabel (Davis) Anderson and lived in the area... View Obituary & Service Information

The family of Dean E. Anderson created this Life Tributes page to make it easy to share your memories.

Send flowers to the Anderson family.