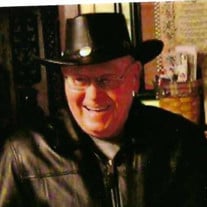 KNOX – David E. Thompson of Knox passed away on Sunday, February 28, 2021 in Northwest Health Starke Hospital following an illness. He was born on July 22, 1933 in Kingman, IN to the late Hoy W. and Edna L. (Hess) Thompson and was 87 years-old at the time of his death. Dave lived in the area most of his life and had retired as a Millwright Leader from Ford Motor Co., Chicago Heights after 38 years of faithful service. In June of 1953 he married Dolly Jacobs who preceded his death shortly after in 1956. On October 24, 1965 in Knox, he married Jean Ketcham who survives. He was a member of the Knox United Methodist Church and the UAW Local #588. After retirement he worked for the North Judson San Pierre School Corporation. Dave was always happy and smiling and he never met a stranger. Most of all he loved his family dearly and especially cherished his grandchildren and great grandchildren. Dave is survived by his loving wife Jean of Knox; two daughters Barbara (Phil) Johanan of Knox and Pamla J. (John) Starkey of Knox; five grandchildren Jason (Shannon) Thompson and David (Misty) Starkey all of Knox, Adina (Jeremy) Awald of Koontz Lake, and Heather (Bobby) Tincau and Olivia (Kevin) Moritz all of Tennessee; ten great grandchildren; one great-great grandchild; two brothers Ronald Thompson of Dyer and Lon Thompson of Ober; and one sister Nancy Goble of Hamlet. He is preceded in death by his parents, his first wife Dolly, one son David Jr., two brothers Scott and Perry, and one sister Sharon West. Funeral Services will be at 11:00 CST Wednesday March 3 at the Knox United Methodist Church. Visiting Hours will be from 5:00 to 7:00 CST Tuesday March 2 at the Rannells Funeral Home, Hamlet Chapel as well as 1 hour before the Funeral Wednesday at the church. In lieu of flowers the family requests Memorial Contributions be made to the Knox United Methodist Church. The Rannells Funeral Home is honored to be entrusted with Dave’s arrangements and care.

The family of David E. Thompson created this Life Tributes page to make it easy to share your memories.

Send flowers to the Thompson family.