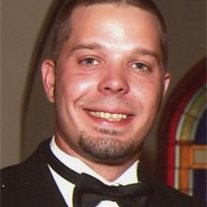 GROVERTOWN-David Cooke Jr., 25, passed away Saturday, December 22, 2012 at IU Health Starke Hospital, Knox, IN. David was born February 16, 1987 in Hammond, IN to David and April (Graves) Cooke Sr. On October 23, 2009 in Plymouth, IN, he was married to the former Ashley Garrett. Survivors include: his wife, Ashley; two sons, Logan and Nathan at home, his father and step-mother, David and Janet Cooke of Walkerton; his mother and step-father, April and Deno Valone of Rensselaer; one sister, Kristen (Christopher) Louck of Rensselaer; step-brothers, Adam Risner, Michael Mc Bride and Deno Valone; step-sister, Nikki Valone and grandparents, John and Betty Cooke of Grovertown. He was preceded in death by his grandparents, Richard and Mary Graves. David was a self-employed auto mechanic. Funeral services will be Thursday, December 27, 2012 at 1:00 p.m. (Central Time) in Rannells Funeral Home, Koontz Lake Chapel where friends may call Thursday from 10:00 a.m. to 1:00 p.m. Burial will follow at Wheatfield Cemetery, Wheatfield, IN. Memorial contributions may be given to the family.

The family of David Cooke, Jr. created this Life Tributes page to make it easy to share your memories.

Send flowers to the Cooke, family.