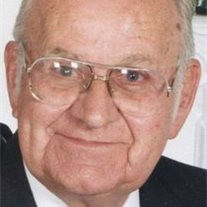 KOONTZ LAKE-Daniel L. Rannells, 81, of Koontz Lake, formerly of Hamlet, passed away Wednesday, October 10, 2012 at Doctor's Hospital, Bremen, IN. Dan was born August 29, 1931 in LaPorte, IN to Joseph and Mildred (Musser) Rannells and lived in the area all of his life. On October 5, 1951 in Indianapolis he was married to JoAnn Turner, who preceded him in death on August 11, 2011. He was also preceded in death by his parents and one sister, Barbara Dolezal. Survivors include: four children, Debbie (John) Hemmings of Avon, IN, Joe (Jody) Rannells of Koontz Lake, Kathy (Tim) Purtee of Hamlet and Kris (Michelle) Rannells of Hamlet; grandchildren, Nicci (Rod) Podell, Barb (Chase) Huotari, Drew (Caitlin Weinstein) Rannells, Abbey Rannells, Ashley Blair, Erik Paniccia and Brittnie Rannells and great-grandchildren, Chace, Ainsleigh, Lexi, Emilie, Riley and Kinley. Dan was the owner of Rannells Funeral Home, Hamlet & Koontz Lake, since 1952. He was a member of the Hamlet United Methodist Church and the Hamlet Lions Club. He was a past-member of the Hamlet Fire Department, the Hamlet Town Board, the Starke County Merit Board, several other business and civic organizations and was the former Starke County Coroner for many years. Funeral services will be Tuesday, October 16, 2012 at 11:00 a.m. (Central Time) at the Hamlet United Methodist Church with Rev. Mark Day officiating. Burial will be at the Fletcher Cemetery, Hamlet. Friends may call Monday from 2:00 p.m. to 8:00 p.m. at Rannells Funeral Home, Hamlet Chapel and Tuesday at the church after 10:00 a.m. until the time of services. In lieu of flowers, memorial contributions may be given to the Hamlet United Methodist Church.

KOONTZ LAKE-Daniel L. Rannells, 81, of Koontz Lake, formerly of Hamlet, passed away Wednesday, October 10, 2012 at Doctor's Hospital, Bremen, IN. Dan was born August 29, 1931 in LaPorte, IN to Joseph and Mildred (Musser) Rannells and lived in... View Obituary & Service Information

The family of Daniel L. Rannells created this Life Tributes page to make it easy to share your memories.

Send flowers to the Rannells family.