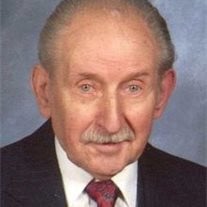 KOONTZ LAKE-Chester Szczesniak, 90, passed away Saturday, October 13, 2012 at VNA Horton Hospice Center, Valparaiso, IN. Chester was born July 19, 1922 in Warsaw, Poland to Jozef and Bronislawa (Malecka) Szczesniak and lived at Koontz Lake for 33 years, coming from Hobart. On December 28, 1950 in Hobart, he was married to Olive Lee, who preceded him in death. He was also preceded in death by his parents and one step-daughter, Sarah. Survivors include: one daughter, Lusia (Dave) Wozniak of Morris, IL; two granddaughters, Katherine (Patrick) Dunn of Naperville, IL and Lisa (John) Greer of Murfreesboro, TN and two great-grandchildren, Lincoln Dunn and Penelope Greer. Chester was a retired employee of East Chicago Machine & Tool and a member of St. Dominic Catholic Church of Koontz Lake. Mass of Christian Burial will be Wednesday, October 17, 2012 at 11:00 a.m. (Central Time) at St. Dominic Catholic Church of Koontz Lake with Rev. Father Anthony Spanley officiating. Burial will be at the Grovertown Cemetery. Friends may call Wednesday at Rannells Funeral Home, Koontz Lake Chapel from 9:00 a.m. to 10:30 a.m. In lieu of flowers, memorial contributions may be given to VNA Horton Hospice Center, Valparaiso or WNIT, South Bend.

The family of Chester Szczesniak created this Life Tributes page to make it easy to share your memories.

Send flowers to the Szczesniak family.