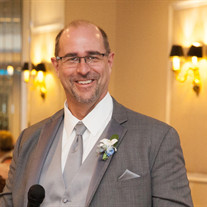 Charles Robert Schnekenburger claimed his eternal reward on the beautiful Sunday morning of August 16, 2020. Chuck, born on September 18,1964 was the son of the late Charles Schnekenburger, the late Harold Schroeder, and Lola Schroeder, who survives. On June 1,1985 he married his “forever sweetheart” Joanne Shaffer. Chuck and Joanne added two beloved children to their family, Kayla (Kolton) Skaggs and Carl Schnekenburger, who will miss him greatly. He is preceded in death by his mother-in-law, Carolyn Shaffer. His father-in-law, Richard Shaffer of Koontz Lake, survives him. A large extended family also survives, including his sisters Susan (Don) Cooley, Sally Krenke, Teri (Garry) Whittington, Kathy (Greg) Cummings, Karin (Gary) Hinton, and LeighAnn (Doug) Hofferth, along with brother Tom (Becky) Schroeder and brother-in-law Philip (Patty) Shaffer. Nine nieces, nine nephews, and many great nieces and nephews who loved and admired their “Funcle” will miss his dry humor at family gatherings. Chuck was a successful business owner of which he co-founded with business partners. His success was achieved because of his hard work and that of many valued employees and co-workers. His happiest times were watching and coaching his children playing sports, cheering for his favorite teams, driving his Mach (on sunny days only), sitting on the beach at Anna Maria Island, and floating on the lake with good friends. In addition to family, Chuck was blessed with many close friends who have supported him throughout his relentless fight against pancreatic cancer. His faith that his God would protect and comfort him remains, along with many great memories. In lieu of flowers, his family requests memorials be made in his name to: Center for Hospice Care c/o Hospice House, Pancreatic Cancer Action Network (PanCan.org) at 1500 Rosecrans Ave. Suite 200 Manhattan beach, California 90266, or The First Presbyterian Church of Walkerton. Rannells Funeral Home in Koontz Lake is in charge of arrangements: The viewing will be from 3-7 pm Eastern Standard Time on Thursday, August 20th. Services will be held on Friday, August 21st at 11:00 Eastern Standard Time at the First Presbyterian Church in Walkerton, IN with visitation at the church a half an hour before the service. Due to COVID 19 mandates and restrictions, face masks and social distancing are required inside both the funeral home and at the Church.

Charles Robert Schnekenburger claimed his eternal reward on the beautiful Sunday morning of August 16, 2020. Chuck, born on September 18,1964 was the son of the late Charles Schnekenburger, the late Harold Schroeder, and Lola Schroeder, who... View Obituary & Service Information

The family of Charles "Chuck" R. Schnekenburger created this Life Tributes page to make it easy to share your memories.

Charles Robert Schnekenburger claimed his eternal reward on the...

Send flowers to the Schnekenburger family.