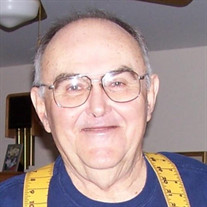 KOONTZ LAKE – Charles O. “Chuck” Lawrence passed away on Sunday March 21, 2021 at Trail Point Village, South Bend following an illness. He was born on October 13, 1940 in Chicago to the late Herbert and Crystal (Del Morse) Lawrence, and was 80 years-old at the time of his death. Chuck lived in the area most of his life. On October 20, 1962 he married the love of his life, Gail Reid, in Walkerton. Together they spend 55 wonderful years together. Gail preceded his death on May 18, 2018, and this was a loss that Chuck never quite recovered from. He retired from NIPSCO after over 30 + faithful years as an electrician. Chuck worked his way up from mechanic, to crane operator, then gas maintenance, and finally substation electrician. All of this while studying and getting certified for these positions. Chuck was a member of the Koontz Lake Fire Dept. where he served over 50 years and was the Chief for many years. He also served his community by working for Starke County EMS for many years. He was a member of the North Liberty Masonic Lodge #266, was an avid outdoorsman that loved to hunt and fish, and was the original MacGyver who could fix anything! Chuck is survived by his four children Butch and Sharon Lawrence of Koontz Lake, Kelly Lawrence of Sequim, WA, Jodi Snedeker of Plymouth, and Jack Lawrence of Nappanee; seven grandchildren; and three great grandchildren. He is preceded in death by his parents and wife. Funeral Services will be at 2:00 EDT Friday, April 2 at the Rannells Funeral Home, Koontz Lake Chapel. Visiting hours will be from 5:00 to 8:00 EDT Thursday, April 1 and from 1:00 until the time of the Funeral, also at the Funeral Home. Memorial Contributions may be made to the Koontz Lake Fire Dept. Immediately following the service at the grave site, everyone is invited to go to Koontz Lake Missionary Church where a meal will be provided. To leave online condolences visit rannellsfuneralhome.com.

The family of Charles "Chuck" O. Lawrence created this Life Tributes page to make it easy to share your memories.

Send flowers to the Lawrence family.