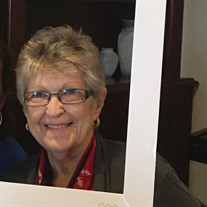 Carolyn “Carol” Roden , age 75, of Koontz Lake, passed away in her home on Saturday, February 22, 2020 surrounded by her loved ones. Carolyn was born on 9/21/1944 to Wallace and Juanita Clanton in LaPorte, IN. On June 7, 1980 she married Victor Roden. They remained married until his passing on May 8, 2010. Carolyn spent many years bartending in the local pubs and managing the Walkerton American Legion where she was very active with her husband Vic. She valued all the friendships she gained through those years. Carolyn is survived by her beloved children, grandchildren and great-grandchildren. Daughter, Janet Wheeler (Jeff) of Hawaii, along with her children and grandchildren. Chad Matusiak (Danielle Sims) of South Bend and their children, Ayden Matusiak, Tanner Sims of Texas. Leah Holleman (Scott) of Grovertown and their children, Oliver and Spencer. Kassie Lonigro (Frank) of Hamlet and their children, Jaxen and Kasen. Son, Norman Gene (Butch) Wheeler, Jr (Myra) of Walkerton Indiana. Their children Cheyenne Wheeler and her daughter Chloe Clark. Kenny Young, Tayla Sweeny and her children Elaina and Ember. Danielle Young and her son, Bryson. Melody Young and her children Braxton, Arieanna and Eli. Daughter, Joann Heim (Barry) of The Villages, FL. Their sons, Jordan of Chicago, Il and Carsen of Philadelphia, PA. Daughter, Bonnie Milzarek (Noel) of Dyer, IN. Their daughters Miranda of West Lafayette, IN and Sarah of Valparaiso, IN. She is also survived by her sister Deborah Harris of Fish Lake along with many nieces and nephews and cousins. She is also survived by many dear friends, neighbors and many who called her “Grandma Carol”. She is preceded in death by her husband Victor H. Roden, her daughter, Kathy Lynn Wheeler, parents, Wallace and Juanita Clanton. Her Sister, Connie L. Mills and her brother Ronald L. Clanton. Along with many longtime friends she has dearly missed over the years. Her wish was to be cremated and put to rest with her husband Vic. Condolences may be sent to the family at www.rannellsfh.com

The family of Carolyn Faye Roden created this Life Tributes page to make it easy to share your memories.

Send flowers to the Roden family.