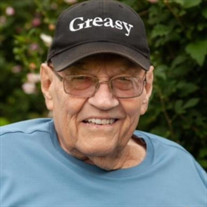 GROVERTOWN-Carl E. "Greasy" Harness passed away peacefully in his home surrounded by his loving family on Friday, October 8, 2021, following an extended illness. He was born March 19, 1928, in Grovertown to the late Edward L. and Vera B. (Stutsman) Harness and was 93 years old at the time of his death. He lived in the area his entire life and on August 1, 1953, in Donaldson he married the love of his life, Eleanor Rosander, who survives. Greasy was a 1946 graduate of Grovertown High School and a U.S. Army Veteran. He was a retired farmer but was equally known for his 43 years of service as a bus driver for both Grovertown Schools and Oregon-Davis School Corp., and operating his own hauling business. He was also a member of the Knox Masonic Lodge, Scottish Rite South Bend, Orak Shrine Michigan City, Hamlet American Legion, Grovertown Conservation Club (which he was Treasurer for 20 years), and served on the Starke County Council for 16 years. Sports were also very important to Greasy. He won a number of MVP trophies and sportsmanship honors in softball and basketball. Greasy was a fast pitch softball pitcher for 40 years, playing in various leagues throughout the area. After softball he became an avid golfer, playing in leagues and enjoying games with the guys. He liked to collect watches, clocks and knives. He was a huge Cubs fan since age five and ecstatic to see his beloved Cubs win the World Series in 2016. Greasy is survived by his wife, Eleanor; daughter, Janice Harness Hughes; and many nieces and nephews who he loved dearly. He was preceded in death by his parents; daughter, Marilyn Jae; one sister, Betty Wilhelm; and two brothers, Harry and Marion(Cy). Funeral services will be Friday, October 15th at 2:00 p.m. CDT at Rannells Funeral Home, Koontz Lake Chapel. Friends may call from 11:00 a.m. to 2:00 p.m. CDT at the funeral home. Burial will follow at the Grovertown Cemetery. Memorial contributions can be made to the Oregon-Davis Scholarship Fund. For online condolences visit rannellsfuneralhome.com.

GROVERTOWN-Carl E. "Greasy" Harness passed away peacefully in his home surrounded by his loving family on Friday, October 8, 2021, following an extended illness. He was born March 19, 1928, in Grovertown to the late Edward L. and Vera B. (Stutsman)... View Obituary & Service Information

The family of Carl E. "Greasy" Harness created this Life Tributes page to make it easy to share your memories.

Send flowers to the Harness family.