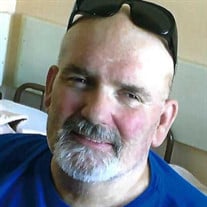 CULVER – Byron D. “Dale” Singleton Sr. of rural Culver passed away on Monday, March 1, 2021 in his home following an illness. He was born on June 13, 1956 in LaPorte to the late John “Jack” Singleton and Gloria (Van Dusan) Singleton and was 64 years-old at the time of his death. He was a Machine Operator at Bomarko in Plymouth prior to his illness. On September 18, 1999 in Grovertown he married the love of his life Deb Carpenter who survives. Dale was the most caring person you could ever meet and he loved his family dearly. He enjoyed classic cars and had the unique ability to name the make, model, and year of any car you showed him. His dream car was a black 1970 Cuda. He also loved to fish when he was healthy. Bass fishing was his favorite, but he also liked to, as he called it, drown some worms while fishing for bluegill. Dale is survived by his loving wife Deb of Culver; seven sons Kenny (Sarah) Singleton of Knox, Byron (Beth) Singleton Jr. of Kalamazoo, MI, Jimmy of Marcellus, MI, Jeremy (Melissa) Singleton of Knox, Shawn (Rachel) of Volinia, Bryon (Morganne) Singleton of Culver, and Dan Steinke of Culver; one daughter Ashly (Jeremiah) Dunlap of LaPaz; several grandchildren and great grandchildren; four brothers John Singleton of Knox, Chris Singleton of Plymouth, Gary Singleton of Knox, and Kevin Singleton of Knox; two sisters Karen Sobieck of Knox, and Margie Singleton of South Bend and his step-mother Marielena Singleton of Knox. He is preceded in death by his mother, father, one brother Robert Singleton, and one sister Brenda King. Dale’s wishes were to be cremated and a Celebration of Life Ceremony will be held at a later date. The Rannells Funeral Home, Hamlet Chapel is honored to be entrusted with his care and arrangements.

The family of Byron D. "Dale" Singleton Sr. created this Life Tributes page to make it easy to share your memories.

Send flowers to the Singleton family.