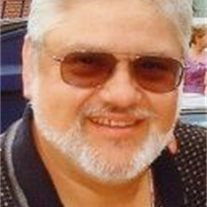 Walkerton - Brett Allen Halsey, 54, passed away Friday, February 20, 2015 at his home. Brett was born July 6, 1960 in South Bend, IN to Ray and Betty Lou (Litteral) Halsey and lived in the area all of his life. On November 28, 1997 in Walkerton, IN, he was married to the former Bonnie Spencer, who survives. Also surviving are two daughters, Brandy Brugh and Courtney (Josh) Halsey Dubie; three sons, David (Dana) Wright, Neal Wright, and Todd Halsey; grandchildren, Breanna, Casondra, Catrina, Halee, Seth, Owen, Neal Jr., and Abigail; his father and step-mother, Ray and Sharon Halsey; one sister, Rae Ann (Terry) Wyllie; one brother, Scott (Holly) Halsey; nieces, Brittany and Ashley; and nephew, Ian (Jennifer). He was preceded in death by his mother in 2000. Brett was a former employee of Kay Industries of Plymouth. He was a member of the Elks Lodge, Sons of the American Legion, Walkerton Post #189, and the NRA. Funeral services will be Wednesday, February 25, 2015 at 1:00 P.M. (Eastern Time) in Rannells Funeral Home, Koontz Lake Chapel. Burial will follow at the Grovertown Cemetery. Friends may call at the funeral home Tuesday from 4:00 p.m. to 8:00 p.m. ET and Wednesday one hour prior to the service. To leave online condolences, visit rannellsfuneralhome.com.

The family of Brett Allen Halsey created this Life Tributes page to make it easy to share your memories.

Send flowers to the Halsey family.