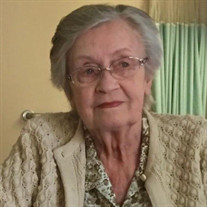 Bonnie Sue Luna (Morris), passed early morning on Saturday, March 21st, at the age of 84. Bonnie was born in Princeton, Kentucky. She described Princeton as being “a beautiful little town of mostly good, hardworking, Christian people” and had many cherished memories of growing up there. Bonnie would tell stories from her childhood about picking berries with her friends, making food with her mom to take to those in need, and walking with her family to church on Sunday. Bonnie was a woman who had great faith in God. She was known for always going above and beyond to care for people in need, working hard, raising a strong family, and for her southern-style home cooking. Bonnie started her first job the day after her sixteenth birthday at the Princeton Hotel in the dining room. The dining room fed the troop trains transporting soldiers during the Korean War. Sometimes 300 or more soldiers at a time, but usually 200 soldiers and 2 officers. The soldiers would eat in shifts. The officers would leave a tip and one time they left her a $30 tip. She earned 35 cents an hour plus tips. She was also employed at the Anderson Company in Gary, Indiana during the late 60’s and 70’s, and owned and operated the Wildwood Motel in Hamlet, Indiana with her husband. Bonnie was preceded in death by her husband, A.V. Luna; son, James Luna; father and mother, Arthur and Mabel (Dunbar) Morris; one brother, Louard McGregor, several nieces and nephews, and in-laws Van and Effie (Sullivan) Luna. She is survived by 4 of her children: Janie (Bill) Capps; Bill (Teri) Luna, Marilyn Luna Miller, and Patty (Phil) Shaffer; ten grandchildren: Scott (Tiffany) Caldwell, Jennifer (Tyler) Biss, Mindy (Teddy) Kalch, Laurie (Angel Costilla) Luna, Chris Luna, Thomas Luna, Heather Miller, Katie Miller, Eric Shaffer and Chelsea Shaffer; 8 great-grandchildren. 2 beautiful great, great grandsons, and lifelong friend, Frances Britt. A private graveside funeral service will take place at Fletcher’s Cemetery. “The moment we take our last breath on earth, we take our first in heaven.” –Billy Graham.

The family of Bonnie S. Luna created this Life Tributes page to make it easy to share your memories.

Send flowers to the Luna family.