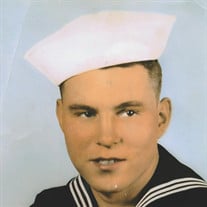 KNOX-Bobby G. Nantz, 80, passed away Tuesday, June 4, 2019 at Porter Regional Hospital, Valparaiso, IN. Bobby was born September 11, 1938 in Owensboro, KY to Doss and Mamie Nantz. On September 14, 1992 in Decatur, AL he was married to his wife, Jonnie. Survivors include his wife, Jonnie of Decatur, AL; two daughters, Carla Michel and Kelly Coley, both of Knox; two sons, Gary Nantz and Raymond Nantz, both of Decatur, AL; five grandchildren, Keith, Lindsay, Ryan, Brittney and Emily; many great-grandchildren, nieces and nephews; three step-daughters, Patricia, Sherry and Chasity, all of Alabama; and seven step-grandchildren. He was preceded in death by his parents and 14 siblings. Bobby was a veteran of the U.S. Navy and was a loving father and grandfather. A funeral service will be held Friday, June 7, 2019 at 4:00 p.m. CDT at Rannells Funeral Home, Hamlet Chapel. Visitation will be Friday at the funeral home from 12:00 noon until 4:00 p.m. CDT. Military Honors will be conducted. Cremation will take place after the service.

The family of Bobby G. Nantz created this Life Tributes page to make it easy to share your memories.

Send flowers to the Nantz family.