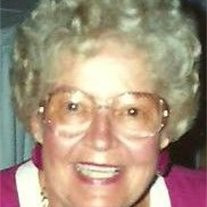 HAMLET-Beulah Anne (Christoph) Schoppel, 86, died at 12:15 p.m. Monday, February 28, 2011, at Miller’s Merry Manor, Plymouth, where she resided since December. Beulah was born June 20, 1924, to Albert and Mary (Pietz) Christoph on the family farm, originally owned by her grandparents, William and Josephine Christoph, four miles west of Hamlet, where she lived for the past 40 years. She was preceded in death by an older sister, Carol L. Christoph, who died in infancy. She attended the Hamlet School from where she was graduated with the Class of 1942, and continued her studies at Valparaiso University, joining the Gamma Phi sorority. On March 4, 1944, in the home where she was born, she married Edward S. Schoppel, who preceded her in death on February 27, 1990. Together they had four children who survive: Brian E. (and Linda) Schoppel, Fairland; Janet R. Schoppel, Chicago; Ralph S. Schoppel, Ann Arbor, MI; and Mary Jo (and David) Finley, Plymouth. Also surviving are two granddaughters, Christa L. Finley, a freshman at the University of Vermont, and Andrea J. Finley, Plymouth. Beulah was a homemaker who baked two delicious pies and fried chicken every Sunday. She helped Ed farm, first Valparaiso (until Ed was drafted into the Army for two years and served as a radio operator in Japan), then Hanna for 25 years where she had a thriving egg business, and Hamlet since 1970, when her mother passed away and she inherited the family farm. She also worked outside the home at Kingsbury Ordnance Plant during the War, Sears catalog and Starke Memorial Hospital in Medical Records. She studied voice and sang soprano solos for special events. A music lover, she also knew how to play the cello, flute and piano. She was a member of the Hamlet United Methodist Church, a charter member and president of the Starke County Crime Stoppers for nearly 20 years, and appointed to the Starke County Planning Commission and the Starke County Board of Zoning Appeals. Active in the Democratic Party, she served as the Davis Twp. Democratic poll clerk for numerous elections. She was LaPorte County President of the General Federation of Women's Clubs and a member of the Country Home Improvement Home Extension Club, the V.F.W. Auxilliary, the American Legion Auxillary, the Order of the Eastern Star and the Hamlet and Knox bowling leagues. Governor Frank O'Bannon had named her a Distinguished Hoosier upon her 75th birthday in 1999. Funeral services will be Saturday, March 5th at 11:00 a.m. (Central Time) at Hamlet United Methodist Church. Friends may call Friday from 4-8 p.m. at Rannells Funeral Home, Hamlet Chapel and Saturday at the church after 10:00 a.m. Burial will take place at Fletcher Cemetery, Hamlet. In lieu of flowers, memorial contributions may be made to an animal shelter, Hamlet United Methodist Church, Alzheimer’s and Dementia Services of Northern Indiana, Center for Hospice and Palliative Care, or the National Kidney Foundation.

The family of Beulah A. Schoppel created this Life Tributes page to make it easy to share your memories.

Send flowers to the Schoppel family.