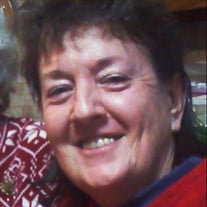 Barbara M. Burket, born February 28, 1958 to the marriage of Les and Myrtle Keehn, was called home by Jesus Thursday, May 14. She fought a brilliant battle with cancer for years, but lost the war during her final treatment at St. Joseph Regional Medical Center. We believe that He needed her talents in His Heavenly gardens. She is now beside her beloved husband, David Burket, whom she married February 12, 1977. After the marriage, she joined Davey on the family farm in Walkerton. Together they worked the land and raised animals of all kinds. Beside the normal farm animals, they had exotic pets such as llamas, Jacob 4-horned sheep, emus, peacocks, sika deer, and pheasants. You may have seen Barb at Ag Days in the old Scottsdale Mall showing her baby emus. Together they attended swap meets and sales, where they shared experiences and stories with other pet owners. Back on the farm, Dave did the plowing, but it was Barb who kept the tractor running. Thanks to good friend Bernie Westhues, she was quick to learn the mechanics of maintaining all the equipment on the farm, including their cars and trucks! She was a landscaper not only on her own property, but for many other residences and businesses in the Walkerton area. She and Dave raised chemical-free produce, which they sold in a stand behind the house. Barb was so proficient at planting and weeding the large plots of vegetables that the teenage boys who worked for them often had secret contests to see if they could weed faster than she could. Barb left them in the dust every time. They would then tell her of their attempts over the huge farmer's feast that was provided every day at noon. There was always two meat dishes and many sides, most of which were grown right on the farm. Barb's mom was the chief cook, but Barb even helped with that. She had a strong work ethic instilled in her by her dad, who took her out to help put in fences and other outside work at age 10. She held fast to that work ethic right up to the end. One of her many accomplishments was becoming an EMT. Even after giving that up for the farm, she managed to save a friend's life in her driveway! After losing her beloved Dave in 2002, she took in her sister, Beverly and then her little brother, Lonnie. They helped as best that they were able, but Beverly passed away after several years, and then Lonnie died two years ago. And then, she was alone. But that didn't stop her. She continued growing vegetables and raising animals, in a scaled-down mode. Still, she sold her produce at Farmer's Markets and many events and festivals in a wide area. It wasn't so much about making money as it was meeting new friends. Once you met Barb, you were her friend. And she wasn't bashful about sharing how Jesus had brought her through two different kinds of stage 4 cancers 16 years ago. Her doctors called her a "walking miracle". Unfortunately, the medical cure is what led to the final illness. But this time, it was just too much for her to bear. Barb was a devoted Republican election official and a longtime member of the Walkerton Business and Professional Women’s Association. Everyone who knew her, knew just where you stood with her. Her personality was as strong as her muscles. She was someone you wanted on YOUR side! She will be sorely missed by countless family members, friends, neighbors and business associates. She and Dave favored an organization called Heifer International, which give folks in impoverished nations livestock for them to raise so they can gain a livelihood. If you are so inclined, it would please Barb if you would consider a gift to that non-profit. She was predeceased by her parents, sisters Nettie Patrick and Beverly Teske, and by her brother, Lon as well as her husband, Dave. Surviving her are her sister, Irene Daniel of Sacramento, CA and her brother, Larry Keehn of Providence, RI. She is also survived by one nephew who was there for her whenever she had a need, Arlen Patrick, who drove 90 miles to help. Surviving as well are nephew Brian Patrick, Dave’s niece and her husband Cindy and Ervin Linse who were good friends as well. She and Dave helped raise Dave's two nephews, John and Kingston Collins, who survive, and one niece, 2 great nieces and 2 great nephews. Also missing her greatly are her 4-legged babies, Pepe, Zoe, White Paws and Benjamin. Barb was a powerful presence in her community where she went about doing good for many. If you were to look up “Superwoman" in the dictionary, you would find her picture. Due to attendance restrictions in place for the Covid-19 pandemic, Private Funeral Services are being held. She will be buried next to the love of her life David in Woodlawn Cemetery. In lieu of flowers, memorial donations may be made in her memory to the Heifer International, PO Box 8058, Little Rock, AR, 72203. The Rannells Funeral Home, Koontz Lake Chapel has been entrusted with her care. To leave online condolences visit rannellsfh.com.

Barbara M. Burket, born February 28, 1958 to the marriage of Les and Myrtle Keehn, was called home by Jesus Thursday, May 14. She fought a brilliant battle with cancer for years, but lost the war during her final treatment at St. Joseph Regional... View Obituary & Service Information

The family of Barbara M. Burket created this Life Tributes page to make it easy to share your memories.

Send flowers to the Burket family.