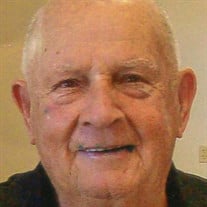 WALKERTON- Arthur J. Schmeltz, 96, passed away Monday, February 25, 2019 at Memorial Hospital, South Bend, IN. Arthur was born May 24, 1922 in Walkerton, IN to Otto and Bertha Mae (Walters) Schmeltz and lived in the area all of his life. On August 20, 1949 in Niles, MI, he was married to Carol "Joan" Cogswell who preceded him in death. He was also preceded in death by his siblings, Virgil Schmeltz, Linder Schmeltz, Evelyn Mark, Violet Kolmer and Ralph Schmeltz. Survivors include two sons, Brad (Dawn) Schmeltz and Brian (Terri) Schmeltz; six grandchildren, Ryan (Rebecca) Schmeltz, Jill (Derrick) Klinedinst, Ethan and Levi Horvath, Amanda (Rob) Smith and Michael Schmeltz; great-grandchildren, James and Emily Klinedinst and Charlie Schmeltz; and one sister, Wanda (Norm) Jones. Arthur was a member of the Walkerton United Methodist Church and the North Liberty Masonic Lodge #266 F&AM. He was a school bus driver for the John Glenn School Corporation for many years. He was an avid golfer and the club champion for the Lake June West Men's League in 2011 and 2013. Arthur was a joyful man who always seemed to have a twinkle in his eye. He loved to visit with people and he never met a stranger. He loved his family deeply and will be missed by many. Funeral services will be Saturday, March 2, 2019 at 11:00 a.m. EST at Rannells Funeral Home, Koontz Lake Chapel. Burial will follow at the Woodlawn Cemetery, Walkerton. Visitation will be Friday at the funeral home from 4:00 pm to 7:00 pm EST and Saturday one hour prior to the service. Memorial contributions may be given to the John Glenn Education Foundation.

WALKERTON- Arthur J. Schmeltz, 96, passed away Monday, February 25, 2019 at Memorial Hospital, South Bend, IN. Arthur was born May 24, 1922 in Walkerton, IN to Otto and Bertha Mae (Walters) Schmeltz and lived in the area all of his life.... View Obituary & Service Information

The family of Arthur J. Schmeltz created this Life Tributes page to make it easy to share your memories.

Send flowers to the Schmeltz family.