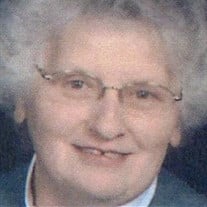 NORTH JUDSON-Amelia “Milly” (Saylor) Meyers, 79, passed away Saturday, August 31, 2019 at Pulaski Health Care Center, Winamac, IN. Milly was born November 25, 1939 in Hamlet, IN to Harry and Edna (Coil) Saylor. On November 9, 1963 in Hamlet, she was married to Donald J. Meyers, who preceded her in death. She was also preceded in death by her parents and three sisters, Evelyn Tibbs, Lois Burnham and Violetta Mueller. Survivors include two children, Donna (Ernie) Salyer of North Judson and David (Katie) Meyers of Knox; four grandchildren, Amber (Brian) Berg of North Judson, Ashley Salyer of North Judson, Alicia (Nick) Grezenko of San Pierre and Dawson Meyers of Knox; two great-grandchildren, Carley and Cayleb Berg, both of North Judson; one brother, Eurrat (Carolyn) Saylor Sr. of Grovertown; and one sister, Alida (John) Gouker of North Liberty. Milly was a graduate of Hanna High School and a member of the Davis Wesleyan Church. She was a former cook at North Judson- San Pierre School Corporation. Funeral services will be Thursday, September 5, 2019 at 11:00 a.m. CDT at Rannells Funeral Home, Hamlet Chapel. Burial will follow at the Hanna Cemetery. Visitation will be at the funeral home Wednesday from 5:00 p.m. to 9:00 p.m. CDT and Thursday one hour prior to the service.

The family of Amelia "Milly" Meyers created this Life Tributes page to make it easy to share your memories.

Send flowers to the Meyers family.